From 7th to 9th of April 2017, DKWien has sent four teams and one judge to compete in the PEP IV tournament in Belgrade. Competing were Katja & Paul, Miri & Mark, Dariusz & Vin,  Katarina & Jan-Gunther (St.Gallen), and Ingo as judge.

All four teams and our judge broke into the semi-finals, ergo half of the break consisted of Viennese teams!
One of our teams, Dariusz and Vin,  won every single round and broke first on 15 points.

Two of our teams, Miri & Mark and Katarina and Jan-Gunter (St. Gallen) made it into the finals,
and Miri & Mark won the finals and were crowned champions of PEP IV.

A huge success for DKWien,  congratulations to all the teams and the winners!

END_OF_DOCUMENT_TOKEN_TO_BE_REPLACED 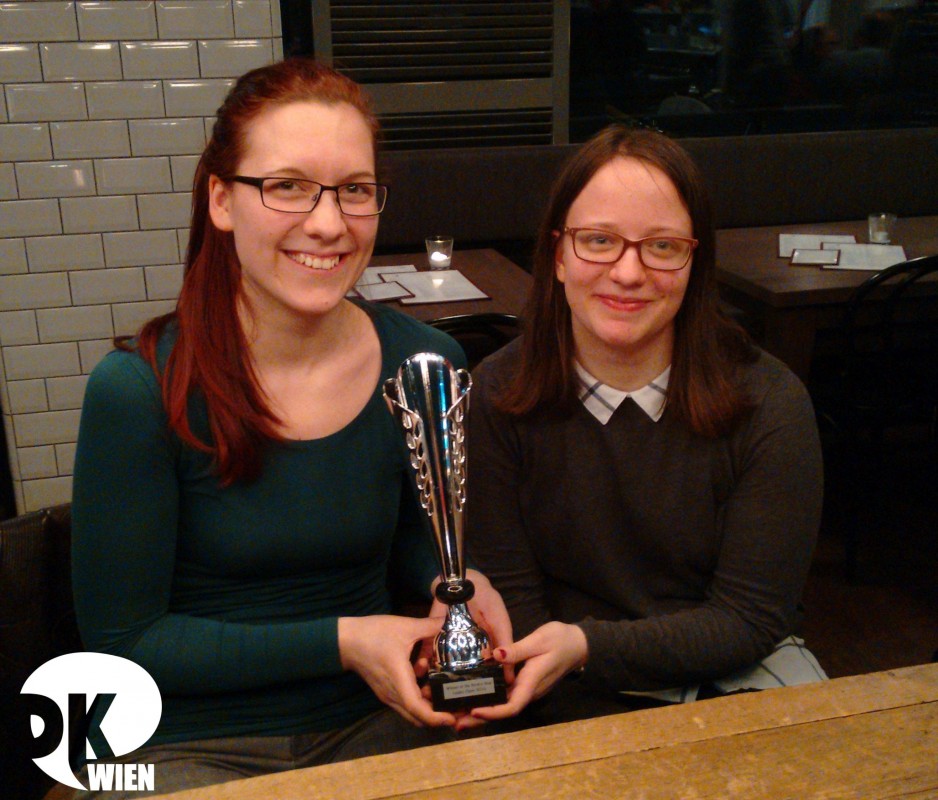 With great pleasure we announce that Anna Neuber & Kata Sebők are the champions of the Leiden Open Novice Final 2016. Competing as the team “The Wien Machine”, they broke after five preliminary rounds into the Novice Final together with three other teams from England, including a team from Oxford,  and the Netherlands.  Kata and Anna, speaking from Opening Opposition on “THW would allow the armed forces to unionise, strike, and collectively bargain” prevailed against all other teams and won the final.  In the ceremony, Kata & Anna  received a trophy (see picture). Congratulations! The team “Daaan”, Daan Welling (Netherlands) and Dan Lahav (Israel) won the final debate in the Open category. Congratulations! Last but not least, our thanks go to the tournament’s organisers from the Leiden Debating Union, who hosted a great weekend for DKWien’s three teams and two judges.

Motions from the Leiden Open 2016:

Rd 2: THW directly elect the members of the US Supreme Court.

Rd 3: THBT schools should motivate children to believe that anyone can succeed through hard work regardless of their background.

Rd 4: THW grant those diagnosed with terminal illnesses the right to access treatments that have not completed clinical testing.

Semi-final motion: THW allow individuals to sell their right to sue to a third party.

Final Motion Definition: Immediate democracy is a method in which citizens can change their vote at any time. The number of MPs given to each party is allocated on a daily basis and represents the current support percentage of the population. In this system, there are no elections but the number of MPs from each party can change every day.
Final Motion: THW enact an immediate democracy.

The tab is accesible here. 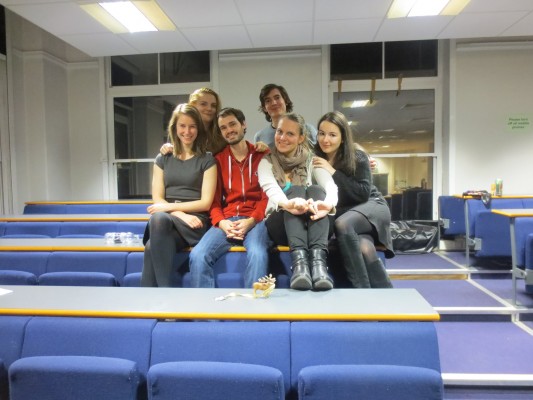 The SOAS IV, held annually by the SOAS Debating Society, is one of the largest and most well-known tournaments in Europe. This year’s event, CAd by Joe Dyer, Helena Ivanov, Michael DG and Jamie Batchelor became especially appealing to us after the announcement that there would be no registration fees for international teams.

As with many UK tournaments though, part of the challenge is to get there and organize yourself a place to sleep. Using three different London airports and accommodations, our three teams all made it there in time.

After five preliminary rounds, Vienna B (Miri Muntean and Mark Etzel) broke 1st in the ESL category, missing the open break only on speaker points. Vienna A (Melanie Sindelar and Madlen Stottmeyer) did excellent as well, breaking 2nd and capturing ranks 2 and 3 respectively on the ESL Speaker-Tab.

After two previous final appearances (Jakob and Mark in 2012, Madlen and Melanie in 2014), we are incredibly proud to finally lift the trophy (figuratively, we didn’t get an actual trophy). Moreover, this victory marks the first time that a DKWien team wins an international IV!

Aside from the competitive side, the tournament also offered two enjoyable socials. Saturday evening, we enjoyed sandwiches and a beer at the SOAS Student Union Bar. Due to exhaustion however, it did not end up being one of the most exciting nights in our society’s history. Thus, we were pleasantly surprised to learn, that daylight savings time ended and we would all get an extra hour in bed. Sunday’s social and the winner announcement took place in the Big Chill House near King’s Cross.

R1: This House Would give 2 votes to women in Political elections

R2: This House believes that law enforcement organisations should never provide incentives to gang members to inform on their superiors (e.g. plea bargains or monetary rewards).

R3: This house regrets the decline in oil prices over the last 18 months.

R4: This house believes that Donald Trump’s presidential campaign is good for America.

Quarter Final: This House Believes That the state should reclaim a fixed proportion of all charitable giving and redistribute it to other charities on the basis of their effectiveness

Open Semi Final: This House believes that the trans movement should actively seek to separate themselves, their issues and their collective identity from the LGBTQ movement in their campaigns and in the public consciousness.

Open Final: This House Would prefer a world in which there are no extreme emotions such as boiling rage, falling madly in love and extreme grief.

ESL Final: This House Believes that countries, like Switzerland, that were neutral in World War 2 should pay financial reparations to states occupied by the Nazis. 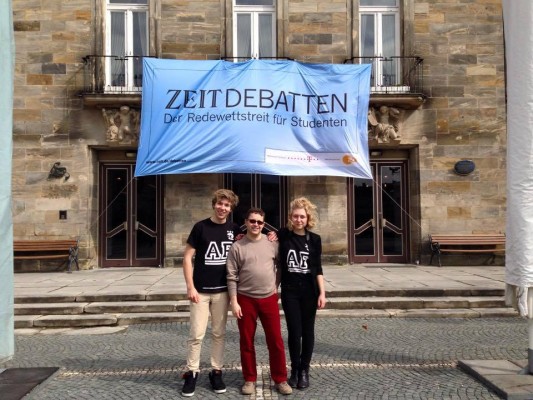 This House believes that everybody should go to debating tournaments!

Randomly scrolling through the depths of Facebook on a Thursday night, a wild BPO post appeared! A twist of fate! We decided to throw away our boring weekend plans and head to the Budapest Open the next day!

On the road with DKWien

The next thing we remembered was sitting in Roman’s “PapaMobile” on the highway, listening to some good Kraftwerk tunes with our mentoring DKW mates, Elli, Regina, Andi and Roman! After merely two and a half hours on the road, we arrived at our destination at Matyas Hotel, which was located near the Budapest Danube. Only a short while later we were heading to Central European University (CEU) to catch Michael Shapira’s public speaking lecture, which was markedly brilliant and informative. In addition to this, we got some further information about the tournament by the organizers of BPO. After realising how hungry we were, we were happy to hear that dinner was served not too far away in the canteen. Obviously the organisers knew there is nothing worse than hungry debaters, since the delicious Hungarian food was served very quickly! After dinner, the organisers led us to a nice bar – which made us even happier – as it could only mean one thing – two ominous yet wonderful words: Free. Drinks. We also had a chance to have a chat with our potential opponents who turned out to be really nice folks from Hungary, Croatia, the USA, Portugal, Germany, Serbia, Turkey, Israel, Kazakhstan, Poland, Ireland, France, Kosovo, Romania, the Czech Republic, the UAE and even more places!

Because of these overwhelming impressions of a long day and our tired feet, we were craving relaxation. Luckily we had a room on the fifth floor with a stunning view of Buda Castle and the Danube at its foot, where we kept the party spirit up. Around midnight, we thought a ghost might join us, but instead, Ingo showed up and completed the last team of our wonderful delegation!

Waking up to fierce competition

Then came Saturday – the first competition day – rise and shine! After a vitalizing breakfast, we started our first actual debating round. Especially for us novices, this particular moment was very exciting. Having only debated in our own society so far, we had no idea how it would be out there in the wildness of Debate Land, but with the help of our experienced team partners – Ingo and Andreas – we got over our nerves with great results.

And so it went from round to round and we felt our growing experience carrying us through a great variety of debates. (Motions below!) It was very interesting to see all the different perspectives of those many other international debating societies and to get an idea of how diverse and smartly structured techniques and argumentation lines can be. You were able to feel the improvement of your own speeches, the structure for example.

After four rounds of brain-wrecking intellectual competition, it was clear to us all that we needed refreshments and a reward for our first accomplished tournament day. Fortunately BPO delivered yet again – by bringing us to one of the well-known ruin pubs, ANKER-T – another great evening with inciting discussions and good music.

A final effort and a thrilling final

On the final morning we gathered all our remaining debating energy and headed into the last round! Though we unfortunately didn’t make it to the semis, we had the pleasure of watching very inspiring and motivating debates in the final rounds. Especially the final, at which the motion read “This house believes that the theory of communism is immoral” lead to very heated discussions about the value of morality or immorality and the very difficult question of whether theory can ever be seen without practical references. With these thoughts in mind, and after the closing ceremony had ended, we sadly already had to leave Budapest. But it was noticeable – mainly in our melancholic stares out of the car windows with a smile on our face – that we left Budapest with heartfelt gratitude and the irresistible wish both to come to Budapest again one day and to attend more tournaments as soon as possible!

Round 1: THW decrease the power of an individual’s vote as the voter ages.
Round 2: THW ban all advertising of consumer goods and services.
Round 3: TH opposes political correctness
Round 4: THW approve drilling of oil and gas only based on a referendum.
Round 5: THW place a disincentivizing tax on businesses that use freelance labour.

Semi-final: THW ban religions and ideologies from promising any form of rewards or punishments in the afterlife for any behaviour in this life.

Final Motion: This House Believes That the theory of communism is immoral.
Winners: Nika Jelaska & Peer Klüssendorf (Team Chairman Meow) in Closing Government. Congratulations and thanks to three Budapest Debating Society who organised the event! 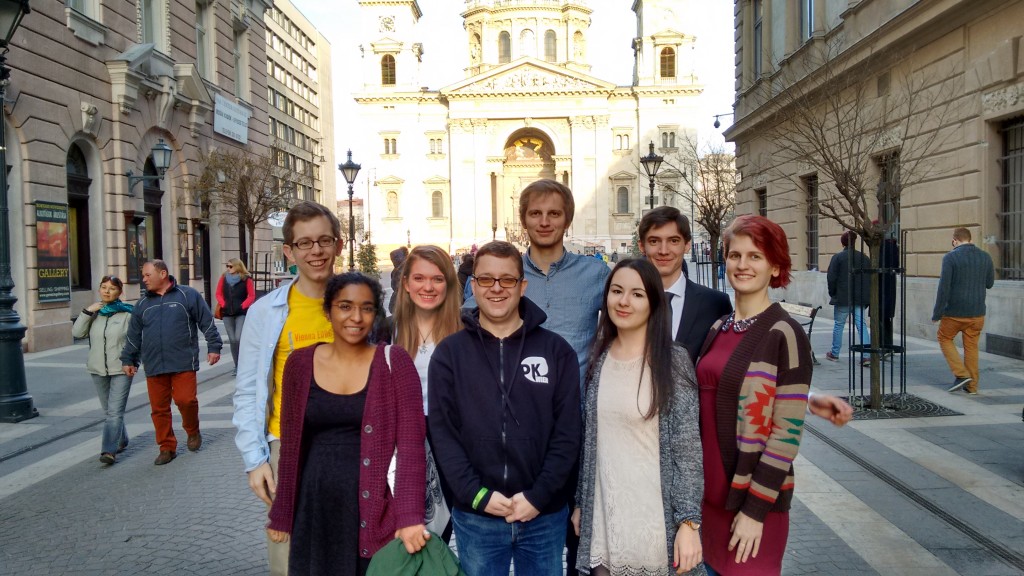 The DKWien contingent at the Budapest Open 2015. 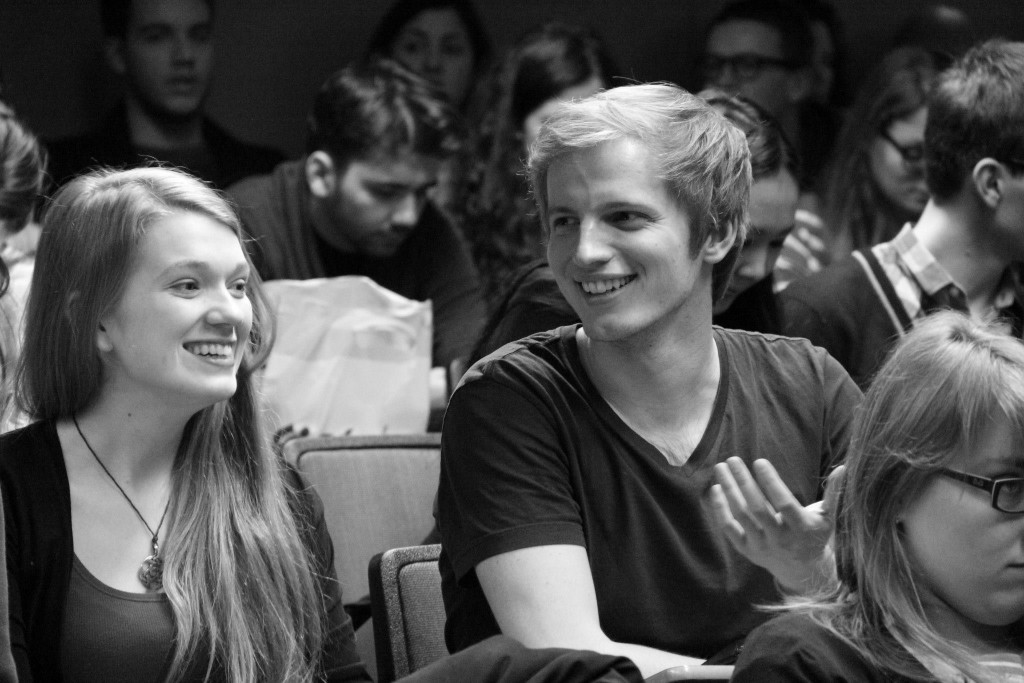 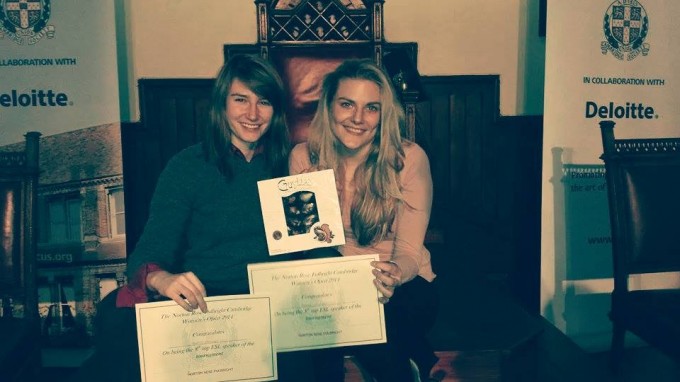 We are incredibly proud to announce that Melanie Sindelar and Madlen Stottmeyer are the winners of this years’ Cambridge Women’s Open in the ESL Category. They also did incredibly well on the speaker tab and were declared 5th and 8th best ESL speaker respectively. Vienna A (also their teamname for the upcoming World Championships) also broke into the semi-finals of the Cambridge IV, and, having defeated the current European Champions Belgrade A and an excellent team from Malaysia (IIUM), moved right into the ESL Final. Melanie was also declared 8th best ESL speaker of the Cambridge IV.  That was not yet all the good news coming from England last weekend, as our judge Elisabeth Vikydal broke to the ESL semi-final of the IV!
The Cambridge IV and the Cambridge Women’s Open are prestigious tournaments held on an annual basis which attract the best speakers from Europe, North America and Asia and are seen as one of the integral preparation tournaments for the upcoming World Championships in Kuala Lumpur, Malysia. Madlen and Melanie will be representing Austria in Malysia as Vienna A.