DKWien’s ‘Contingent of Bright Sunshine’ broke a team and an adjudicator at the European University Debate Championships 2013 in Manchester. Hereby the Mission to Break is finally accomplished and DKWien enters the league of institutions that break teams at the Championships. Read below for what this means.

The author apologises for all football references in the text.

The League of Champions

In football, as in most other sports there are different leagues and levels. In the lower leagues it is already a beautiful game. Players show off their fitness and impress with their skills to play the ball in friendly competitions. Yet, the higher they climb, the more professional it gets. When a team reaches the best of the best, the game becomes a form of art where it is all about strategy. The players that reach this level are all perfect in fitness and skill. Creativity, mental strength and team spirit become crucial in determining the winner. There is no simple right or wrong anymore. Instead, it takes sheer brilliance to understand the fine nuances that decide the game. Welcome to the league of champions!

Debating is similar in some sense. In the lower-points rooms it is a fun and highly educational game. It strengthens the mental fitness of the people who engage in it. However, in the high spheres teams play the Game of Arguments. Logic is the war-room and teams are pushed to the edge of human intellectual capacity. Those are the debates where a speech itself is merely the tool for conveying complex thoughts. In this league, teams built extensive logical frameworks in order to support their principles. The differences in the application of these arguments are often marginal and yet decisive. It takes years of training and a group of sharp minds for a society to be able to produce a team that can win. This is the league of those who break* at major tournaments. 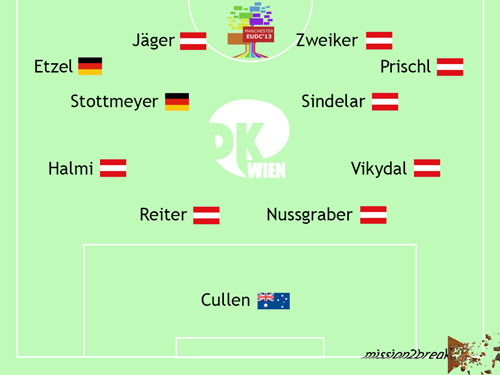 When DKWien started attending international tournaments in 2009, the break was no concern. Back then, attendance supplied us with everything we could wish for: cheap travelling to foreign places, mental exercise against teams at your level, friendly people and a healthy amount of competition.We did not have to deal with those drawbacks that societies encounter when they start being very competitive. Aiming for the break is incredibly hard for a society that has no legacy to work with. Training needs to be very frequent and teams need to work themselves up at international tournaments, so that they can pass on their improvements internally. But most importantly, the competition generated between members can be dangerous to the spirit of a society. Thus, a society constantly needs to balance the crucial sense of community with its competitive goals. Often, those turn out to be a lot less compatible then one would hope for.

Still, one and a half year ago we decided to aim for the highest league. We recognised that we love debate and the intellectual challenge it entails. We have seen debate as more than just an exercise but as a form of art that is worth pursuing for its own sake. Yet, it only reaches that level when you compete in the high leagues. Also, it turned out that we appreciated competition way too much. Debating solely for the sake of friendly competition just was not satisfactory enough anymore. 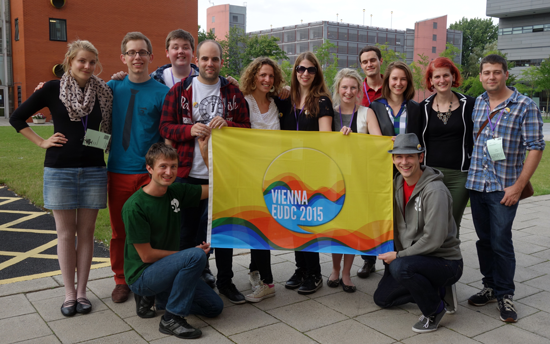 The DKWien Contingent of Bright Sunshine in all its might

The past 1 ½ years were long and emotional. There were those weeks were we met for 5 training session a week before rushing to yet another tournament on the weekend. Understandably enough we almost dove into frustration when the “Contingent of Burning Ambition” narrowly missed the break at WUDC in January 2013. Then again, we experienced emotional peaks such as at the double break at SOAS IV or the win at SDM. The latter experiences  gave us a glimpse of dawn into the new age. It took the incredible team spirit of every single member at DKWien to pull us through. It is easier not to care about how much money is spent on flights when hanging out in a DKWien contingent is so much fun. Also, the support we received was incredible. At this point we really want to express our gratitude to all those wonderful people that make us successful. Michael, Harish, Christine, Fletch, Anne, Rogier and many more were instrumental in pursuing our goal. These people are kind and generous. They offered help, assistance and training without ever asking anything in return. This is, in a nutshell, the story of how we were carried through the dark clouds of the low rooms at British IVs at times where a break at EUDC seemed unreachable. 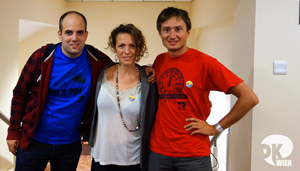 They did it. Rosie and Christoph & Stefan broke at Manchester EUDC 2013

Suddenly, bright sunshine. Our 11 people delegation to Manchester EUDC 2013 did it. Christoph and Stefan broke 8th, Rosie rocked the adjudication break. The other teams confirmed that this represents the strength of the society. The contingent collected 15pts per team on average and Vienna B missed out on speaks only. Not breaking 17th of the tab, they were actually a bit unlucky and yet the result is amazing . This is the success of everyone who was part of the mission, went to tournaments, helped raising our standard of training or simply contributed to making the entire endeavour fun. DKWien is one of the few institutions that get big breaks now. We entered the highest league.

Now we play for the title.

*Breaking means that a team manages to enter the elimination rounds of a tournament, i.e. the best 8 or 16 teams on the tab.

Round 1: THW ban video games in which the player engages in brutal and immoral violence in a realistic setting.

Round 2: THW require international development aid budgets to be approved by popular referenda.

Round 3: TH, as the Muslim Brotherhood, would sincerely offer to cease resistance, participate in elections and respect a liberal constitution

Round 5: THBT Israel should allow members of the Jewish diaspora to vote in elections.

Round 6: TH applauds the rise of songs by female pop artists that glorify assertive female sexuality. For example: Nothing on, I strut around; I do it big, I shut it down; I wonder if you’ll be able to handle me; Rita Ora – R.I.P.

Ronde 7: THBT it is in China’s strategic interest to cease all non-humanitarian assistance to North-Korea until it verifiably ends its nuclear programme.

Round 8: THBT Barack Obama should not have granted legal immunity to officials who ordered the use of torture.

Round 9: THW provide welfare in the form of basic goods and services rather than cash payments.

Open Semi Final: TH regrets that Western Media demonised Islamist Terrorists rather than portraying them as criminals with legitimate grievances

ESL Final: THBT the state should not fund any works of art or performances that the average citizen would not recognize as having artistic merit

Open Final: THW give more votes to citizens according to their performance on a current affairs test