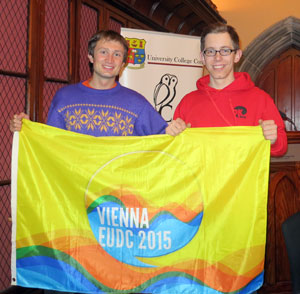 As the Rec Sec* rightly pointed out at the final, the Irish debaters are very much like a family indeed. They share the same customs when they go to tournaments and frequently run into each other on the small island. Still, all of the institutions have their own character. We learned that there is the elder brother that always comes late (TCD), the blond celebrity sister that is fond of herself (UCD L&H) and the brother somewhere in the middle who especially likes doing justice to the fine wine served on such occasions (Galway). And there also is the cranky sibling who keeps the family together by hosting such gatherings (UCC Philosoph). At Cork IV they all come together for 5 rounds of debates, Karaoke and a Christmas dinner.

The Irish Debating Family welcomed us very warmly. As continental debaters we are comparable to the remote relatives who only share a very remote node up in the family tree but still show quite a bit of family similarities (and debating addiction is only one of them). So, even if we did not get all of the inside jokes of the heart of the family, we could fit in very easily and felt we were part of the crowd. Indeed given the friendliness of the Irish debaters it would have been rather hard not to integrate.

The tournament itself proved that UCC Philosoph were not organising it for the first time. Everything ran smoothly and they stayed friendly and relaxed throughout the smoothly running competition. Extras like self-baked cupcakes and the delicious Christmas dinner added a lot to the experience. We felt  really nicely treated. 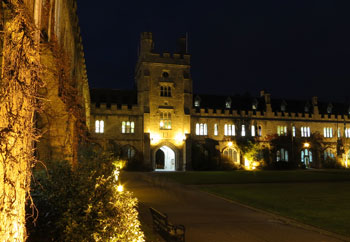 Most of the teams that competed were Irish, with the exceptions of a Glasgow team, a team from University College London and a contribution form the Roosevelt Academy in the Netherlands. As the Irish institutions would send many of their Freshers to the competition there was a separate novice break, while the top teams broke to Semis.

For DKWien it was a successful adjudication tournament. Two of our two judges broke and while Andreas got to adjudicate the novice final, Stefan was in the panel of Semi Final 1. Stefan and Andreas also took part in the Invitational the day before the actual tournament, which got them an extra 3 rounds of debating with decent teams.

In conclusion it was worth packing the woollen Christmas Jumper (yes there was an extra competition for that, and Irish debaters dressed up to the nines for that) and heading up to far Ireland. We met a lovely crowd, drank Irish tea and Irish hope juice and argued – because this is what family meetings are about in the end.

Special thanks to Convener Ciara Grant and her team of owls from the UCC Philosoph!

*The Recording Secretary (Rec Sec) is responsible for recording the minutes of the society’s meetings and reading them to the members at the beginning of the next meeting. The crowd at the final debate unanimously agreed that this had been the exactly accurate minutes of the last meeting, word by word.

CA: Sophie Scannell
Motions:
R1: THBT Foreign Visitors to Islamic countries should dress and act according to local sensibilities while in public even if not legally obliged to.
R2: THW never allow prisons to force feed hunger striking detainees.
R3: TH supports the use of targeted advertising on the basis of gender.
Final: THBT suicide bombing is a legitimate tactic during war.

CAs: Christine Simpson, John Beechinor, Harish Natarjan
Motions:
R1: THBT once artists earn enough to constitute a comfortable wage, they have a duty to make their work freely available.
R2: THBT Libya should repeal its ban on senior members of the Gaddaffi Regime (including civil servants, military personnell, parliamentarians and financiers) from holding positions in government.
R3: THW force violent offenders to undergo the Ludovico technique.
R3 Info slide: The Ludovico technique forces patients to watch pictures of violent acts while being administered nauseating drugs. It makes patients experience nausea when thinking about violence, thus creating creating aversion to violent behaviour.
R4: THBT developing countries should use policies such as permits to restrict rural to urban migration.
R5: THW allow Pro-Life organisations to pay women currently considering having an abortion to carry the pregnancy to term.
Semi Final & Novice Final: THS the actions of Anonymous and other such vigilante groups.
Semi Final & Novice final info slide: Anonymous is an online vigilante group that campaigns to reopen investigation on people they deem to have evaded justice. Methods to make investigations reopen on alleged perpetrators include the use of viral videos to put shame on them and publish their personal details, such as in the case of the Steubenville High School rape case. (Info slide not verbatim.)
Final: Assuming you would not be found out, in the event of a terrorist attack on US soil, committed by Islamist extremists, THW fabricate evidence that the attack was committed by the dominant ethnic and socio-economic group, e.g. white Anglo-Saxons.

Take A Closer Look At Our EUDC Belgrade Teams!

Just a few more days until European University Debate Championship 2012 will be kicking off in Belgrade. We are really proud to be sending a…read more →