Why Choose Budapest Open As Your First Tournament?

Is it worth it choosing a Budapest Open as your first tournament ever? A few of the five speakers and two judges who participated in Budapest Open (November 25-27) reflected on their experience there - in particular, those for whom it was the first competition.

As it turns out, a judge laughing during your speech can mean that you are either terrible or really good. In our case luckily the latest. (We won that round.)

Additionally, it was not only my first time seeing people from all over the world debate and chat with them before the judges announced the call, but also to lose a round because I misread the motion and held a completely off-topic prime minister speech. But there has to be a first time for everything, I guess.

However, the biggest surprise was that when tears of frustration started rolling down my cheeks, no one was mad at me for ruining the mood. Instead, everyone was there for me: “Don’t say that’s irrational, Hannah. It’s very valid how you feel.” and “You did insanely well, we were in the room with half of the people who broke.” were only some words of encouragement I heard, not even mentioning all the hugs. As weird as it sounds, this is my favorite memory of the weekend, because it shows how much we care for each other.

Then, the big disappointment: My partner and I had missed Open break by speaker points. And while getting bubble tea with the whole DK Wien gang to celebrate our novice team breaking on their first BP tournament ever, my weird brain told me that it wasn’t fair that our team name was not up on the screen, because I felt like we had had a disadvantage amongst other teams.

When people said that I would learn for life in debate, I certainly didn’t expect this realization to hit me while sipping bubble tea with my teammates. Even though I learned a lot and breaking or winning would have been nice, what really made this tournament one of the best weekends of my life, were not the won rounds or the ten points on our ballot: It was the people. From judges letting me stop for taking my blood pressure to cheering for Anton and Adora getting into novice finals and clapping for Liam and Theo for breaking as judges. And from debaters I have never met before cheering me up after losing a round to Aleks, the best debate partner ever, comforting, encouraging, and pushing me to do my best.

It is remarkable how within only seven debate training between the start of this season and the tournament, we all grew together and I am so proud to be a part of this amazing community. Or how another Fresher put it: “We are DK Wien.”

“I remember the nerves creeping up on me during the period leading up to the Budapest Open. I was perfectly aware of the fact that this was my first debate tournament, and naturally, this was slightly frightening. In this sense, the support I received from the club was invaluable in preparing me for the tournament – both by helping me improve as a debater, and equipping me with the skills to go to Budapest with confidence and a sense of cautious optimism.

Frequent practice sessions with my debate partner, Anton, allowed me to engage in debating hands-on. This meant that I was able to gradually polish and refine my skills and abilities, while also becoming more confident in what I was doing as well. Of course, the experience of working together with my debate partner also turned us into a stronger team, as we were able to understand each other’s strengths and weaknesses and accommodate these in our approach.

The encouragement I received from other debate club members was also extremely constructive. All of these factors meant that, despite having never taken part in a debate tournament before this, I felt assured that I could do well as I made my way to Budapest. Taking part in the tournament itself was a thoroughly enjoyable experience.

I learned a great deal about debating and developed my ability to structure an argument and speak more confidently.Being confronted with topics I was largely unfamiliar with also presented an opportunity to think creatively and intelligently under pressure.

I certainly didn’t expect to be talking about the groupification of football, something I had hardly heard of before, let alone had developed ideas on, so when one of our debate motions raised this topic, I had to be adaptable and spontaneous.

Naturally, over the course of the tournament, not everything always went our way. In fact, our very first debate did not go as well as we had hoped, and it was difficult not to become totally demoralized after experiencing a rocky start. However, the teamwork that Anton and I had built up was fantastic here, as we were able to encourage each other to keep trying. This certainly paid off – we kept going and worked harder, and ended up coming first in three different debates, which was a huge achievement and one that we were extremely proud of ourselves.

It would have been easy to react to our early setback and let it break our momentum for the rest of the tournament, however, by remaining committed and working effectively as a team, we were able to come away from the tournament having achieved something we hadn’t always thought would be possible. And finally, the tournament was great fun. It was exciting to try out and experience something new, and I particularly enjoyed the opportunity to meet such a huge variety of new and interesting people from so many different places.

All things considered, I would wholeheartedly recommend taking part in a debate tournament to all new and novice debaters. It was a brilliant opportunity to showcase my existing skills, while also improving upon these and developing new ones. I had a great time meeting lots of intelligent and interesting people, and I look forward to taking part in more debate tournaments in the future. 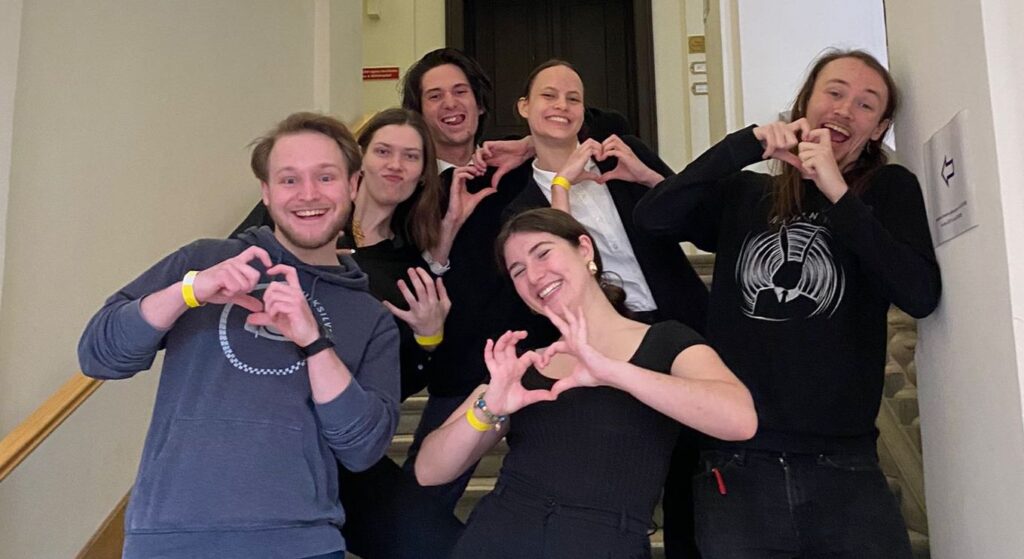 Overall, the DK Wien is very proud to announce that one novice team (Adora and Anton) and two judges (Theo and Liam) broke into the Budapest open. Apart from that, another team, namely Aleks (experienced speaker) and Hannah (novice) showed a great result scoring high in the rankings!