First of all we have to make clear we love Israel. The food is good there, people are mostly young, good-looking and friendly, there are many interesting things to see and the whole country seems to combine the best things of  Middle-Eastern, European and American culture. Therefore tourists usually would not even get bored there without having a debate tournament to go to. The special attraction of Eilat is definitely the airport in the city center, and the beaches at the surprisingly cool Red Sea aren’t that bad either.

Secondly Israel  is a good place to debate. There are lots of debating societies with very good speakers that regularly break at major tournaments like Euros. The political disputes in the country lead to a never ending supply of potential debate motions and as we found out at the Red Sea Open, they really know how to organize a tournament. The great adjudication pool was lead by CA Anat Gelber and DCAs Will Jones and Can Okar. The rest of the judges were described as “Israel’s very own best and brightest”, which was generally true, but additionally there were also some very good international judges like Derek Lande.

The third and probably most important point for the Red Sea Open was the schedule. We had the luxury of a whole day reserved for arrival and departure (travel planning support was included, too). There was the very comfortable fact that we did not have to finish with the generous breakfast buffet before 10am. A fully air-conditioned bus then carried us the 500m to the campus of the Ben Gurion University, every day, so that we never had a reason to complain about the 45°C outside. The cold chain was never interrupted. Our brains were only exposed to the heat if we chose to seize the free time in the afternoon for swimming in the hotel pool or walking down to the beach. There was always enough time after the great lunch buffet, hence we were usually fully recovered for debating another two rounds and enjoying the amply dinner afterwards. In the evening we had enough time again to prepare for socials (club-entranc  included of course) since there was no need to prepare for another round.

The very enjoyable schedule made debaters come from places as far away as India. Incomprehensibly there were only a few other  international teams like one team from Oxford, and one from Munich. Leonhard Weese and Stefan Zweiker built the team Vienna Rokoko for the DKWien (Vienna Debating Society). 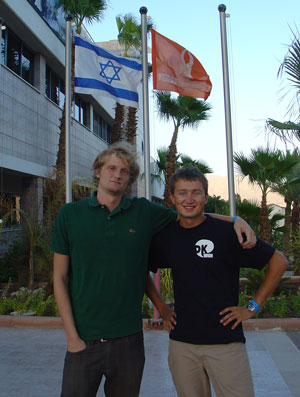 The 6 rounds ended up in a final that was won by Young Men’s Christian Association consisting of Yoni Cohen-Idov (best ESL speaker of the tournament) und Michael Shapira. In the thrilling debate YMCA showed best why religious missionary should be banned in Israel.

The final, proposition bench, on the left: YMCA

If you try to leave Israel via the Ben Gurion Airport as a backpacker you will receive friendly and sophisticated extra-treatment. Nevertheless I would recommend not to think about leaving Israel too fast: 1. if you are in Israel you generally won’t want to leave it. 2. in Austria you might have to survive without hummus and falafel.

This is an EFL article, if you find a mistake, keep it.