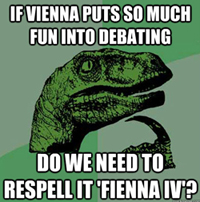 Of course it would be totally worth it coming to Vienna on Friday noon, enjoying VIV and flying off Sunday evening. Still Vienna is beautiful enough of a city to come earlier and stay longer, so we hope we will be able to welcome many of you a few days before the IV already and still have you on Monday. We compiled a special program for you and the good thing is: it’s designed to put even more fun into VIV.

If you join in one of these side events, please RSVP on the relevant facebook event so that we can arrange enough space for everyone!

It’s that time of the year again. February is slowly passing by and the best thing about it is that VIV approaches steadily. We hope you are already looking forward to coming to Vienna. In this update we have gathered some more useful information for you so that you can prepare properly for your time in Vienna. This post will be structured as follows:

2- Arrival: How to get about in Vienna

4- Austro-Hungarian Debating Week: What to do if you are there earlier

5- Help and Assistance: Important numbers and things to find people to help you out

END_OF_DOCUMENT_TOKEN_TO_BE_REPLACED

Madlen joined DKWien in 2012 and after not even a year of debating she joined the DKWien Mission2Break contingent to Berlin WUDC 2013. Since the Vienna teams narrowly scraped past the break, Mission2Break was renamed into MissionToBreaknight; WUDC Berlin was a blast for everyone who had the pleasure to go there. Read Madlen’s thoughts for more information:

END_OF_DOCUMENT_TOKEN_TO_BE_REPLACED

Stances on the WUDC Reg Reform from an evolving society:

The Reg Reform drives a painful thorn into the flesh of those debating societies who are working hard to reach their first break at WUDC (herein ‘evolving societies’). The Reg Reform that was discussed in this year’s WUDC council would make registration for evolving societies worse than it is under a random system, since it substantially diminishes the probability of getting a second team for a society that does not have a legacy of breaks. Yet, those are the societies with the most severe need for a second team. While it is clear that some sort of reform for registration is necessary, this can barely be the fair way the Council was aiming for. To solve this problem the authors suggest abandoning the arbitrary criterion of breaks in the current Reg Reform proposal. Instead the distribution of slots should reward achievements on the tab rather than breaks, to give a chance to those societies who have been steadily working their way up.
END_OF_DOCUMENT_TOKEN_TO_BE_REPLACED

Because in Vienna we know how to play the first fiddle, this is going to be the classiest Vienna IV ever

This article might be interesting for you if you are

(1) registered, confirmed and coming to VIV

(2) waiting for a slot for VIV

(3) from an institution has not yet paid for its slots at Vienna IV.

However, before that some good news: We have more budget than ever, VIV is going to be bigger than ever and we will have a really classy social on Friday this year, so get your fancy gear out and look forward to the most awesome VIV ever.