Patrick Ehmann and John Tomas Eltringham from Berlin A won the Vienna IV speaking from closing proposition on the motion „Given the technology for a full-term pregnancy in an incubator, THB humanity should seek to abolish natural pregnancy“. Berlin A defeated on a 3 to 4 split decision Lukas Haffert and Veronique Lorenz from Tilbury House B; Fabian Farkas and Lyuba Ilieva from Tilbury House East and Arielle Dundas and Tomas Beerthuis from the University of Utrecht. Congratulations to Partick Ehmann for topping the tab. After 6 Rounds, out of 50 teams the break to Semi Finals on the motion „This House believes that EU Countries should promote Christianity and not other religions“ was as follows:

Rd 4: This House believes that Facebook is justified to censor any of its users‘ content for any reason it sees fit. 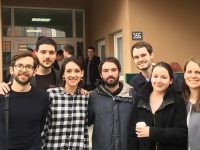 From 7th to 9th of April 2017, DKWien has sent four teams and one judge to compete in the PEP IV tournament in Belgrade. Competing were…read more →