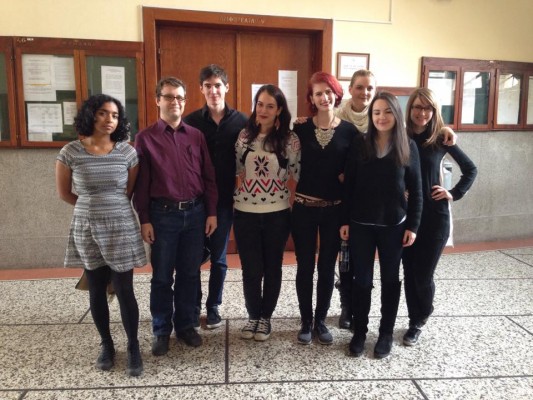 However, by the time the first round started, all of us were ready to argue on whether or not “individuals should be able to grant amnesty to their offenders”. Most of our teams managed this and the two following Saturday-rounds (on too-big-to-fail-banks and LGTBQ-campaigns) with quite some success.

After having sandwiches for dinner, following the pizza at lunch, we were off to our hostels – and eventually the social, both of which were right in the centre of Belgrade and not too far from Belgrade’s law faculty-building.

Day two started enjoyably late and yet on time! (After all, due to the summer/wintertime changeover, we had an extra hour of sleep – or partying). By now, two of our teams were focused on doing a good job on what would be their last two rounds of Belgrade Open (on the subjects of the Catholic Church’s responsibility for HIV / AIDS and dating services based on income and youth). “Vienna Gavrilo Princip” however, with our top speakers Melanie Sindelar (4th on the tab) and Madlen Stottmeyer, broke to the semis as the 2nd best team on the tab. Beaten only by “yes mam”’s Helena Ivanov and Harish Natarajan, who later won the tournament.

On the judging-side of debateland, Regina Puthenpurayil managed to break to semis as well. The Motion for the semis read: “THBT Serbia should immediately cut off political and economic ties with the Russian Federation”.

Although not winning the tournament at Mikser House (final motion: “THW immediately evacuate all relics off cultural or historical importance currently located in unstable countries to stable Western nations), we could then leave Belgrade with our heads held high. We finally travelled back home in the same way we arrived: different ways and different times.
Motions at Belgrade Open 2014:

R1. THW allow individuals to grant amnesty to criminals for crimes they committed against them.
R2. THW break up banks that are deemed too big to fail.
R3. THBT the LGBTQ lobby should make up evidence that prominent anti-LGBTQ rights campaigners are themselves LGBTQ.
R5. THBT developing nations should hold the Catholic Church financially liable for the medical expenses of Catholic HIV/AIDS victims in areas where the church campaigns against condom use.
R6. THW ban dating services built around matching rich men/women with younger men/women.