My first EUDC was a week filled by so many things that I wouldn’t know where to start to describe it. Brilliant people, great debates, fancy buildings, entertaining socials and the burning sun are just a few things that come to my mind. I’m sure that having been part of the great (and quite large) DKWien contingent (3 teams, 4 judges, 1 volunteer) contributed a lot to the amazing time I had and everything I’ve learned in the meantime.

If I’m being completely honest, I am also happy to have been introduced to the atmosphere of an EUDC as an adjudicator – don’t get fooled by the stunning socials, the happy-looking, friendly people and the kind of relaxed schedule of 3 rounds per day (though considering that just the inrounds take 3 days, maybe relaxed isn’t an appropriate word, especially since by the end of the week the tension, the pressure and the lack of sleep all build up). The pressure the teams are under is huge and it seems like it isn’t unusual for them to skip all the non-debating fun on the first days in order to maximize their preparation and resting time. 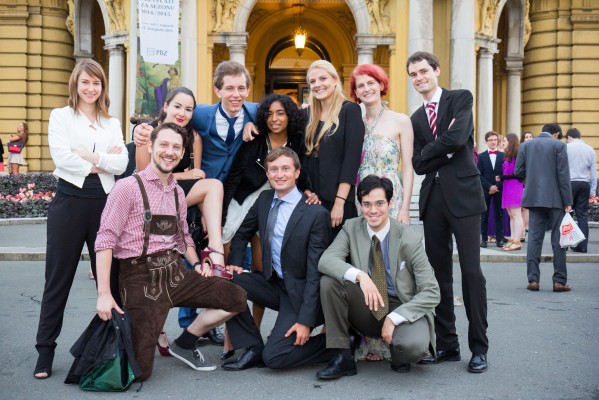 The super-large delegation looking at their best as they enter the venue of the Grand Final (photo:Maedler) 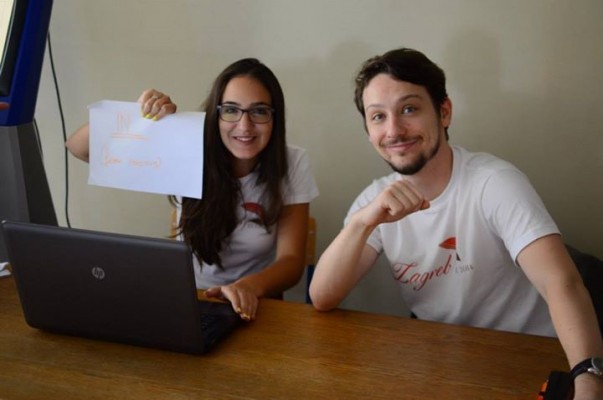 Jakob on a fact-finding mission into the lands of volunteering.

Not even judges can relax

However, that doesn’t mean that judges can relax during the whole time – which one of us wants to crush the chances of making the break to the out-rounds of brilliant people that have put so much work and passion into preparing themselves for EUDC? I’ve seen amazing debates and I’ve struggled along with very talented and experienced judges to rank the teams – sometimes recapping one single sentence (no, I don’t mean one link or one layer of analysis – just one sentence of additional clarity)  making the difference for 1 extra point. Though I think in the end everyone had a lot to win, very few teams got the chance to keep fighting for the title, with in the end only two of them becoming European Champions.

So much ahead of us!

With Rosie making the only DKWien break, the great number of points gathered by our teams wasn’t quite enough to make it further. Though we were all a bit sad after break night, that didn’t last too long – now the pressure was over and we enjoyed the great socials and some DKWien room gatherings for pre-social drinks, watching stunning debates in the outrounds and visiting Zagreb, which turned out to be a beautiful city with lots to offer.

The good times are in no way over for the DK since we’re in the middle of our journey to our own Vienna EUDC, and there’s a lot of work to be done and fun to be had. We all returned home with a greater motivation than ever to make Vienna EUDC at least as good as the last one – and by good I mean the superlative.

DAY 2: OPEN INROUNDS
Round 4: This house believes that EU member states should nationalise Oil and Gas Resources to Surrender Total Ownership and Control to an EU-run Energy Agency
Round 5: Info slide: Commemoration = a state-supported national celebration or mourning of historical events or people Motion: This house believes that states of the former Yugoslavia should not commemorate the events of the Yugoslav Wars
Round 6: Info Slide: Blind voting = you state your political preferences and a party is matched to you according to your preferences Motion: This house would introduce Blind Voting

DAY 3: CLOSED INROUNDS
Round 7: This house would require Police that the Ethnic Composition of their Arrests match the Ethnic Composition of the Population in their Jurisdiction
Round 8: Info slide: micro-finance refers to long-term loans with little or low interest provided to individuals who seek to start a business. Motion: This house believes that micro-finance organisations (charities, NGOs, Development Banks) should offer microfinance loans in developing nations only to women
Round 9: This house believes that states should hold binding national referendums on major peace agreements 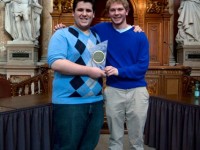 Hot debates in a hot city - this was, in short, the Tilbury House Summer Open 2010. The Cologne debating society held its Open tournament…read more →