It is mini, but beware! This yearly small tournament that DKWien organizes is celebrating a successful year of tournaments and is the starting point for the debating summer!

This year we were very proud to host our Vienna EUDC DCA Emilia Carlqvist. Just before the tournament Debate Connections (Georgiana Mihut and AJ Carver) organised a 2 day workshop beforehand with participants from around the world, which would also join the Mini. 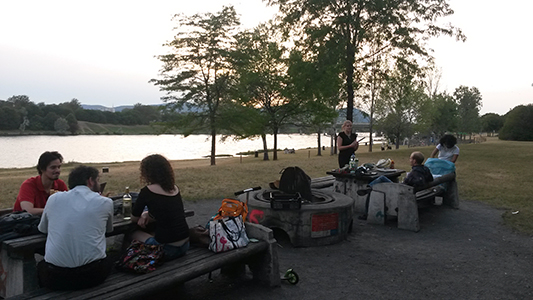 Barbeque at the Danube following the Mini tradition

The first day of tournament started smoothly with a round of debating on Friday afternoon, and quite a bit of watching the World Cup. As a sizzling BBQ is the heart of each and every Vienna Mini, we went to the Danube Island, started a fire and had a feast together with our participants from the workshop and all DK members. We especially had to celebrate the outstanding success of DK teams Europe-wide, as each and every tournament we attended got us a break to out-rounds this year!

The next day was a bit more intense, with three rounds of debating and a good old final. And guess what, the final consisted only of DK-Teams, what a success!! ;-). 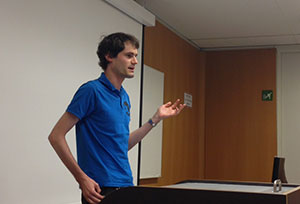 Mark holding his speech in the final

On more serious terms though, Vienna A (Stefan and Melanie) excelled, topping the tab with winning each and every round acquiring 12 points in total, but then had to sidestep, as Vienna B (Mark and Madlen) took the final and won Vienna Mini!

Round 1: Thw require that individuals reveal their identity when communicating on the Internet

Round 3: Thbt students should be sorted according to their ability from young age

Round 4: TH, as the US, would militarily support the Iraqi army in the fight against ISIS

Vienna Mini was good preparation for Euros, thanks to our wonderful CA Emilia! 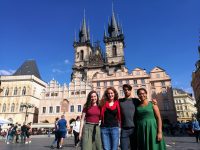 Participating in international competitions is probably the best part of debating. For those who don't believe that yet, here's how one of our newest members…read more →