A brave group of young debaters from our beloved DKWien took advantage of (mostly) great weather for a wonderful trip to Serbia  to compete in the „most serious tournament in Europe“, Arandjelovac Open.

Success was moderate, but our motivation was unbreakable. For the sake of the story, let’s start at the beginning. 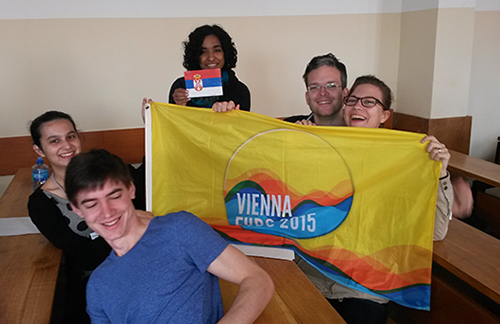 Vienna Delegation at Arandjelovac Open – and the Vienna EUDC flag!

Inspired by our own Stefan Zweiker, who stepped up to fill the role of one of the Deputy Chief Adjudicators  of the tournament, the debating teams of Lisa Duschek & Yasmin Fareed and Christoph Pirringer & Ingo Bandhauer made their way to Arandjelovac.  Our dear Regina Puthenpurayil, who attended the tournament as a judge, was of course a big part of making the experience unforgettable as well.

But since that would be way too straight forward for some, Yasmin, Lisa and Christoph decided to take DK-Wien cruiser, fresh out of top-secret government labs (also known as a Volvo 740). The road-trip led them along the beautiful Balaton (where the local tourism-industry was still hibernating) and then onwards to Belgrade.

The most amazing food, wonderfully nice locals and a great guided walking tour of the city started us off on a great weekend. The following day, Friday, we met up with Regina and Stefan for a quick lunch before we left for Arandjelovac.

After hilariously criss-crossing the city (Arandjelovac is actually quite large) we found our Hotel, the „Runja Zora“, which would be our home for the next 2 days. Luckily for those of us who did not have the responsibility of judging (and for some reason therefore had to go into „seclusion“ separate from the debaters) we had the greatest apartment of the hotel, including a Jacuzzi. Unfortunately however, whenever we had time to use it, we had no hot water.

Well, such are the trials of young debaters, and we had better things to do anyways, since our stay at the Runja Zora started off with a great and lighthearted social event to meet and greet all the debaters.

That the tournament actually WANTED to be the most serious tournament in europe was shown in the „fun-debate“ between the chief adjudicators, debating on “This house regrets the break-up of Yugoslavia”. To balance out 20th century politics, the „graffiti party“ left all of us with artistically-enhanced t-shirts. After a fun evening of celebrating, chatting and drinking Rakia (the devil’s beverage) we went to bed (some more drunk than others). On Saturday morning, the pre-rounds finally started in a nearby school and while Lisa and Yasmin were sent straight to the „bin“ after the first debate, Christoph and Ingo actually made 1st place. After recognizing that the bin „tastes like garbage“ Lisa and Yasmin agreed to leave it as quickly as possible. Fate was finally in their favour and they managed to make 2nd place. Unfortunately, the two guys got 4th in this round. With similarly varying success both teams pushed through all 4 rounds that Saturday with motions ranging from „THB that countries neutral in WW2 (e.g. Switzerland) should pay financial reparations to countries occupied by Nazi-Germany“ to „THB that disabled persons should be paid services of sex-workers with public health-care money.“ The last round on Saturday being a closed round, the day was concluded without knowing how many team-points each team had gotten. Tired from the day, both teams decided to „skip“ the official socials and have a pyjama-room-party instead. It was a nice evening with loads of unhealthy snacks and local (non-alcoholic!) fruit juices. 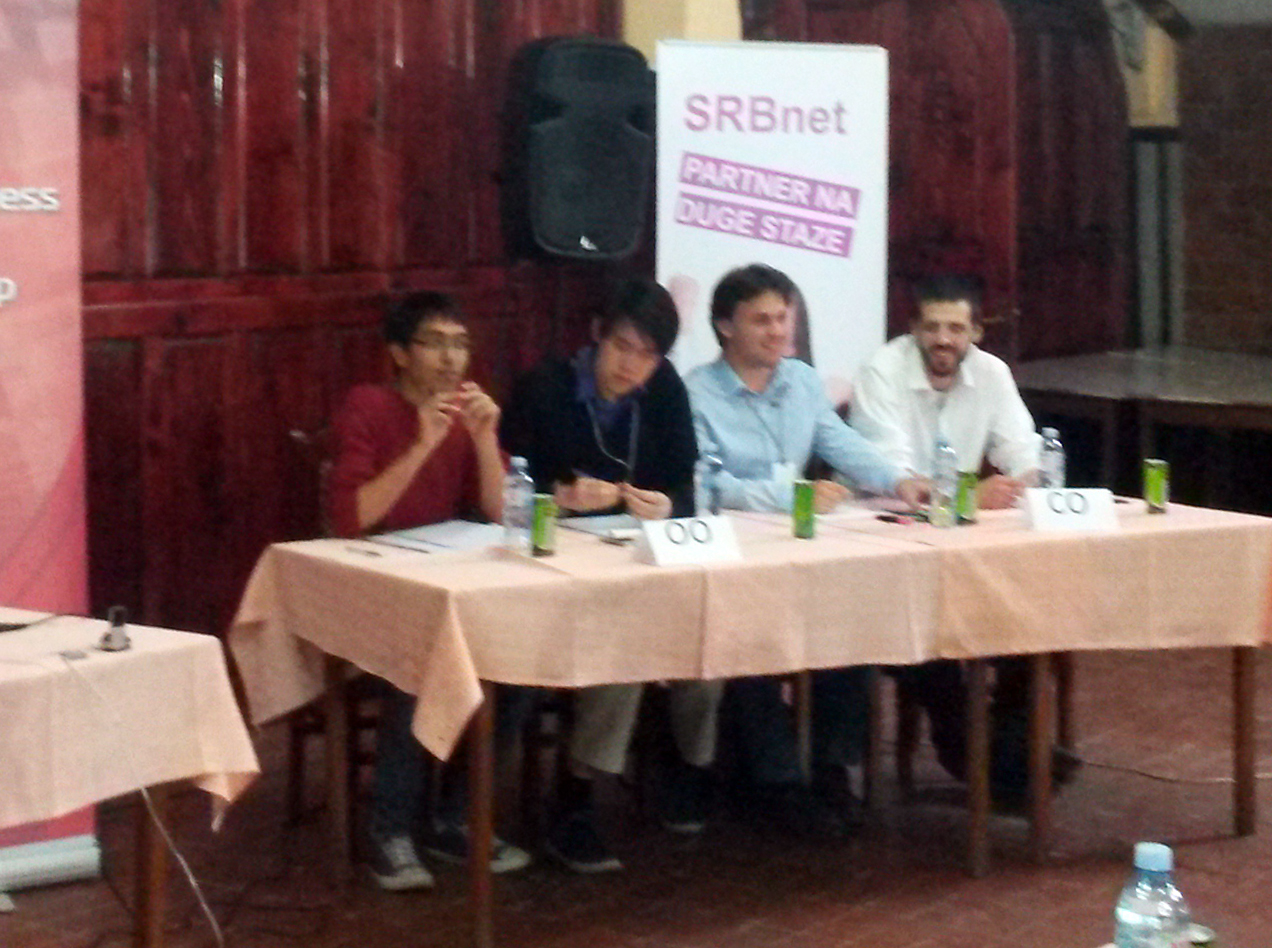 We faced Sunday and with it the last pre-round well rested. The motion was „THBT feminists in the Western World should not campaign against polygamy in Islamic countries“. While in some of the previous rounds prep-time was used by Lisa to explain European History to Yasmin, Yasmin’s time had now come, for this motion was exactly the one she had hoped for. Thanks to her vivid speech about women’s empowerment in Islamic countries the two made 2nd place again.

In the end it turned out that both teams had gotten 6 team-points, so at least no one would kill anyone else out of envy. With a trunk full of incredibly cheap Serbian hygiene products and a newly-developed taste for long road trips we returned home where we decided to get a good night of sleep and digest the impressions and experiences of Arandjelovac Open.

Motions of Arandjelovac Open 2014, March 21st-23rd 2014
R1: In countries where prostitution is legal, THBT national health systems should cover services of sex workers for the disabled.
R2: THBT feminists should not campaign against polygamy in the Islamic world.
R3: THBT countries like Switzerland, that were neutral in WW II should pay financial reparations to states occupied by the Nazis.
R4: THW criminalise the public denial of evolution.
R5: THBT the Western World should not portray ‘’The Great Explorers’’ (e.g. Christoph Columbus, Vasco da Gama) as heroes.
Semi: THBT the US should covertly manipulate election results in South and Central America, in order to prevent the emergence of left wing governments.
Final: THB in right to bear arms
/aap