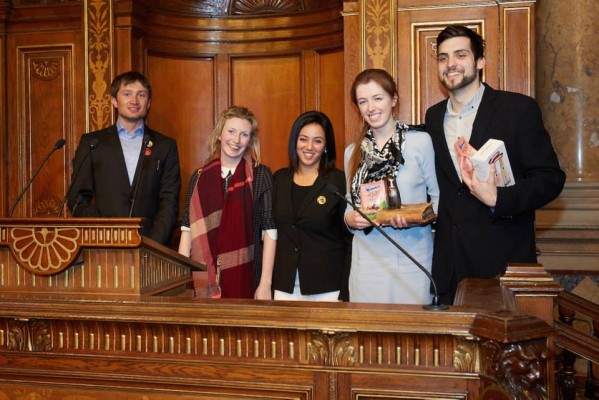 The Winners from Team Belgrado, Marija Simić and Djordje Jovicevic, together with the CA-Team Stefan Zweiker, Christine Simpson and Nicole Loiter.

With the OrgCom and all others involved having more or less recovered, it is now time to officially thank everyone for this year’s edition of the Vienna InterVarsity Debating Tournament!

Convened by the Dynamic Duo of Melanie Sindelar and Regina Puthenpurayil and with an outstanding CA Team – Christine Simpson, Nicole Loiter and our very own Stefan Zweiker – the tournament saw us celebrate the tenth anniversary of Austrian Debating, with nearly 100 teams from all over the world joining us for the tournament and party. Vienna IV 2014 was the biggest Intervarsity ever held in Europe.

After six rounds, challenging quarter- and semifinals and a Grand Final in the Festive Hall of the University of Vienna as well as some fun socials along the way, it was Marija Simic and Djordje Jovicevic from the team “Belgrado” (Closing Government) who took home the coveted trophy.

Following teams debated in the Finals of the Vienna IV 2014:

Congratulations to all and once again thank you for this amazing weekend! Many thanks from Debattierklub Wien to our sponsors, importantly our key partner Baker & McKenzie, the Wirtschaftsuniversität Wien, the Universität Wien, Ströck, Esarom, Red Bull, Jede Dose zählt, Wien Tourismus, and especially JEF – the young European federalists.

Final: THBT No state in any situation has the right to demand, encourage or promote its citizens to fight or die for the country

QF: Given a machine to predict a person’s life 95% accurately, thw not use it

R1: THBT NGOS should reject sponsorship from companies whose actions are not consistent (= who do not act in accordance with) with the charities aims

R2: In situations where it is not possible to achieve both aims and the decision is upon the doctor, THBT doctors should prioritise prolonging life over the quality of that life

R3: Context slide: The current population growth in the Vienna neighbourhood of Ottakring is almost exclusively driven by immigration from beyond Austria’s borders. It ranks among the areas with the highest percentage of immigrants and is particularly popular with immigrants from Eastern Europe, the large majority of which come from the former Yugoslavia.

R4: THBT the US and the EU should support a Russian annexation of Crimea in exchange for an otherwise independent Ukraine.

R5: Infoslide: The Thirst Games is a reality tv show in which contestants compete against each other and battle to the death. The games continue until only one contestant remains alive, and that person wins fame, glory and riches.

Assuming participants have consented freely and in full knowledge of the risks and possible consequences, THW allow its citizens to participate in the “Thirst Games”

R6: Infoslide: For the purpose of this debate “good time tourism” refers to every form of tourism that satisfies human desires and is commonly forbidden in Western states (sex, drugs, chewing gum).

THS nations that market themselves as destinations for good time tourism.

The Tab can be accessed here.

VIV Reg Update #4: Good Times Creeping up on You

It's that time of the year again. February is slowly passing by and the best thing about it is that VIV approaches steadily. We hope…read more →

From March 9 to 11 Debattierklub Wien hosted the Vienna IV for the second time since it's inception. 50 teams competed in 6 British Parliamentary…read more →

Debaters often side with policies of restricting civil rights, freedom of expression and self-determination. That's because they believe in whatever they have to believe in…read more →