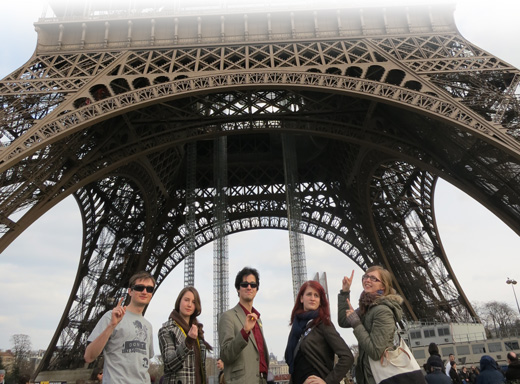 There are moments in a debating career where you’re reminded that debating goes far beyond being in a room and joining three other teams in hamming it up for seven minutes (though it is most definitely a part of it). That, at its core, debating is about fun. Hilarious, ridiculous, glorious fun. And for the Debattierklub Wien delegation to the 2013 Paris Open, it most definitely was one of those moments.

It had all started two days before the tournament’s actual start, when two teams and a judge met at 4:30 in the morning to start what was to be a 2660 km road trip in a venerable old Peugeot, accompanied and guided by Stefan’s already legendary Surfer Dude SatNav system.
And so, after a journey marked by a beer and white sausage breakfast in Munich in the company of a local acquaintance kind enough to show us around (thank you Yoanna!!), a stroll through Strasbourg where spring had been hiding all this time, animated discussions about the sacrilegious combination of mayonnaise and pesto alla genovese in sandwiches and a rather unfortunate selection of ’80’s music, we made a triumphant arrival in la Ville Lumière, just in time for a hasty picture in front of the Eiffel Tower and a Midnight in Paris joke.

The next day, after being reminded of the exact implications of the word « crash » when it comes to sleeping, it is with the traditional puffy eyes and sore backs that we went on a mission to be the most enthusiastic tourists the city had seen. After a visit to the Musée du Louvre, a superlative meal in the heart of Montmartre and the obligatory shopping spree, it was time to join the other debaters for the first social, and to get some rest in order to prepare ourselves for the rounds that were to start the following day.

During the tournament itself, with motions ranging from « This House, as Commissioner Gordon, would never use the Bat-signal » (how much you liked that one seemed to very much depend on how nerdy you were – fortunately, we knew the answer to that) to far more serious ones such as «This House, as the French Parliament, would not have recognized the Armenian Genocide», it became clear to us that the CA’s had given great thought to the diversity of topics to be addressed, thereby ensuring amongst other things heated post-debate discussions between all of us.
But furthermore, in terms of catering alone, the Paris Open was worth taking a look at. You do not often get a copious baguette, cheese and charcuterie breakfast, followed by a bottle of wine, per round, per room. Needless to say, some finished the day in a very happy mood, having completed the rounds in an increasing state of inebriation, to the obvious despair of certain judges. It is thus with our bellies full of Fondant au Chocolat or Tarte Tatin and in very high spirits that we went on to the break announcement and the party that had been organized in the Telecom University’s social rooms.

Unfortunately, none of our teams broke through to the final rounds, which took place at the famous École Normale Supérieure, although we could pride ourselves on the success of our judge Stefan Zweiker, who went on to sit on the panel for one of the semifinals. Nevertheless, the tournament was nothing but a success to all of us. New and familiar faces, dubious jokes and moments of pure, unadulterated joy had sprinkled not only the tournament itself, but everything surrounding it. And on the way home, between the visit to the Musée des Arts et Métiers, a stop in Reims where we stood in awe of the monumental local cathedral, a night spent in a Stuttgart hotel whose owner had apparently decided to fulfill every bureaucratic cliché on the book and a final stop in Salzburg, it would be fair to say that every one of us felt, in the purest sense of the word, happy.

We had been talking, on the way, about how a debater’s « lifestyle » was everything a young student could wish for. And back in Vienna, celebrating our return with an impromptu schnitzel night, as we thought again of the events of the last five days, of our common memories that had welded us together, and still seeing in our mind’s eye how we drove into the sunset to the tune of classic jazz, it was hard to disagree.

1. TH as commissioner Gordon would never use the bat signal.
2. TH as the French Parliament would not have recognised the Armenian Genocide.
3. THW choose a comprehensive system where the only selection process is geographical location and NOT intelligence or ability or talent.
4. TH welcomes the anglicization of the french language.
Main Semi and ESL finals: It is 1945, TH would create the Jewish state in Western Europe.
Main Finals: Given the technology, TH as a genius would decide to lower its IQ to become normal.