Stefan Zweiker, our ‘DK-southern hemisphere export’  lived, studied, debated and surfed in Sydney for half a year. He joined not only the Sydney Mini from 9th to 11th Dec 2011, but also, as he was for some time resident, a debating society that is nowadays known for topping the tabs wherever possible. Read his thoughts which shortly deal with the tournament and then reveal deeper insights about debating as a Sydneysider.

Sydney does not only have a beautiful harbour, a bridge, lots of beaches and an Opera House. In terms of debating the University of Sydney Union defines the worldwide standard of excellence.

Sydney Mini held up the British heritage, as it was not as relaxed as Melbourne Mini. The motions were outstanding despite sometimes complicated. The level of debates was really high and quarter finals probably made the break indeed a lot fairer for the close field, even if they tightened up the schedule significantly. The organisation had also other flaws to deal with, but nothing that really worsened the experience. CAs Tim Mooney and Ben Woolgar seemed busy with assigning the small adjudication core and as there were few feedback forms handed in, it was not a really good idea to come adjudicate without knowing the CAs personally. In terms of socials the very demanding schedule showed its impact, but Saturday evening Thai (=local Sydney) food was really good. Overall I guess it is not wrong to describe it as a fairly British Style tournament focused on debates and less on other stuff, with the slight benefit of warm weather, a gorgeous city as well as a start not before 9am in the morning.

Debating in the Surf City

Let’s deal a little bit with USU. Principally Sydney Uni debaters are just students that meet up regularly to debate and improve their speaking and arguing skills, so there is not too much difference to any other debating society.  What could distinguish them from the majority of clubs though, is that they win heaps of tournaments. Sydney is currently more successfully than any other institution on the planet. Their core competence is dominating the tab and they did not only show this at the previous Worlds and Australs, where large parts of their contingents reached the final rounds but also their very own tournament Sydney Mini was no exemption. Dominic Bowes and Sriram Sikumar took the clear win against debaters from Queensland, Monash and another Sydney team. The debaters of Australia’s largest city are sometimes envied for their success. At Sydney Mini one could read the silent protest in another institutions’ team name: 2% of debating societies win 80% of the tournaments #OccupySydneyUnion.

I found it pretty cool that I could join them in July and did not even have to pay for it. Although it took me some time to get the directions to their debates in the first place I was able to participate in their regular debates and ate from the Turkish pide that was served before they started. Sydney Union is not an exclusive society, every Sydney Student can participate. Moreover Sydney Debaters are really friendly if you talk to them, which makes the experience even more pleasant. However, joining USU is easy in the first sight but a little bit intimidating in the second.

The first debate of the semester which took place as a BP showcase in front of quite a big audience was the best debate I had seen so far. The Sydney debaters are in the very convenient position to have not only a lot of good debaters that have already won Worlds and Australs but also an incredibly high internal level. To be honest I cannot compete with that and I was actually pretty lucky that I could mostly join the novices in the regular debates later on. This did not mean bad debates though. Firstly the word novice covers everyone who has not (yet?) broken at a major tournament according to the Sydney definition, so the threshold is very high. Secondly even most of the first years come with a few years of high school debating experience or a semester of Austral debating when BP debating starts off in July.

The Union usually managed to gather enough debaters for four debates every Wednesday so that different levels could easily practice next to each other. Of course one rarely does get in touch with the core of the society, the really good debaters which know each other extremely well from the tournament contingents and spending a long time in the society. However, the Sydney debaters seem to pass over skill and knowledge effectively to the less experienced debaters in two ways. Most importantly they try to foster internal competition by putting up an internal, ongoing, weekly tournament during the semester where Pro Am teams are encouraged. Unfortunately my travel plans as an exchange student hindered full commitment to this competition but I reckon that learning from those who can is definitely the key to Sydney’s success. The meritocratic tournament style principle is continued when it comes to who gets the (funded!) places at Worlds or Australs. One’s debating skill really counts in the community. Furthermore 45min seminars by experienced debaters before the motion is set give the opportunity to learn more than those who restrict themselves to the Economist. I really enjoyed this offer, if only Uni would have allowed me to be there more often…

Surprisingly, judging plays a minor role at Sydney Union. Regular weekly debates often lack an adjudicator and feedback does not seem to be crucial for the debaters’ development. Sydney debaters obviously learn debating as debaters from debaters. Frankly this was also apparent at Sydney Mini, which had an actually quite small adjudication pool for its size of 60 Teams. Another thing that has to be said on Sydney Union when I compare it to Debattierklub Wien, is the role of socials. It is more the exemption than the rule that the debates end with a beer. On the one hand I found that boring in the beginning, but soon the University delivered a good reason why this might be the case. Getting back to studying the next day is simply easier, when there was no social the night before. The studies at Sydney Uni require this much of commitment to the beloved books as I experience later in a not too overwhelmingly pleasant way on my grade sheet.

Concluding what has been written I had the impression that debating in Sydney is somewhat more serious than what I was used to in Vienna. Internal competition and a clear focus on spending the costly time on debating seems to be a lot more important than the social afterwards. Looking closer I can imagine why they win as often as they do. On one side there is a large crowd of younger generations as they are principally open to everyone. Then there is a good population of really good experienced debaters in one society. Pro Am, seminars, strong competition and probably hard work by the individuals connects the former and the latter forming the end product of extremely successful contingents. Sydney is not the most social, not the best organised, not the most exclusive club, but it is a debating society concentrated on its core: 100% pure debating.

Debaters often side with policies of restricting civil rights, freedom of expression and self-determination. That's because they believe in whatever they have to believe in…read more →

The SOAS IV wooed with reduced fees, compelling motions, an excellent pool of judges and its international character. Even if accommodation remains rudimentary and catering…read more → 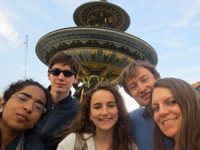 From a Fresh Perspective: Paris Open 2014

For many DKWien debaters, going to Paris Open is a set date, every year. For Gwen Eberhard though, it was the very first time that…read more →