The sparkling sun on wet skin, the smell of sun lotion and tasty food, motions challenging our debater-skills and interesting debates with people from Russia, Germany, Austria, Israel, Greece, England – this year’s Red Sea Open (RSO) was the perfect combination of all of that. It started off on Sunday, preparing debaters with good workshops before the actual debating got started. Well prepared beforehand we went right into Round 1, “This house would ban the payment of ransoms”, another serious one (“This house would force elected politicians and their families to use only public health and education services”) and at last, to add some rock’n’roll, “This house would mandate the use of condoms in porn”. The 38 degrees on this day were not a matter of discussion, whether in the cool university campus, nor afterwards as we headed right to the sea for a refreshing swim with an astonishing view on the Edom Mountains – already Jordanian territory and only a few hops away. The evening came up with enjoyable Shisha smoking in a Bedouin tent. Some of the debaters felt the urgent need (including the author of this article as well as Maja Cimerman, one of the chief adjudicators at RSO), to put their selves in some fancy belly-shaking clothes provided by the Bedouins and fearlessly showing off their non-existing belly-dance skills – and still earning applause.

The next day started off with some time at the pool – “business before pleasure” seems to not be an issue in setting up a schedule for such a tournament, as debaters anyhow could hardly judge which one is which – some suggested there is only the fun part of it at this tournament. So Day 2 provided us with a bit of analysis and value debates – “This house would prosecute violent fouls in sports as criminal assault”, “Actually, This house would rather see one innocent man go to jail than a 100 guilty men walk free” and “This house believes that natural resources should belong to the world and not to any individual country”. With this, the six preliminary rounds came to an end – and somehow they managed to fit, despite of the swim and sun matter, neatly into the tight schedule. That Eilat is the Israeli component of European cities specializing on package holiday is not surprising – so we also had to get a glimpse of that and were taken right in front the beach promenade in a pub that was called “the three monkeys” – happily a name easy to remember as many of us, as it was time to leave Eilat, were intensively interviewed by the security control at the airport about where they stayed, what they did, where they took a drink and with whom – at last they did not ask how many drinks we took – some of us surely could not remember this one. However, despite of the of security controls it was still worth coming to Israel in the first place as it also gives you a feeling of being safe, despite Eilat being in the news just a few days before arrival. 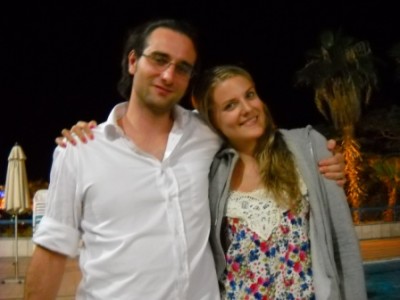 half of the Viennese Team. Aron & Melanie. imagine Rosi and Agniezska beneath us.

Wednesday again started off with some pool time, however most of the debaters were seeking recuperation from last night’s achievements in their air-conditioned hotel rooms. Semis started at midday (This house believes that a universal minimum standard of education is a prerequisite for democracy) followed by lunch and the break. Breaking into finals were: UN (Uri Feldman and Nati Perl), Zakai Mix (Edo Rosenblum and Mila Finkelshtain), Tel Berlin (Sarah Jaglitz and Ro’ee Levy) and Beware of Greeks Bearing Gifts (Manos Moschopoulos and Oskar Avery).

The final followed somewhat later in the afternoon. The philosophical as well as challenging motion read: “This house believes that consent is not a source of moral legitimacy.”

The finals were followed by dinner and a pool party where the winners of Red Sea Open were announced. A very nice gift was the medals for all the participating teams of the final, not mentioning the monetary prizes for the winning team and the best speaker.

Now, which team did win? It was… Beware of Greeks Bearing Gifts – who in that moment were chased into the pool and had to drink out of their goblets in the water. Many joined in and so the evening found its perfect and harmonic end. Some debaters decided to not let it end – and made their way to one of the numerous bars at the seafront. Credit has to be given to the city of Eilat: They know how to entertain people. Also Ben Gurion Debating Society must be given credit: They know how to create great tournaments. See you next year! 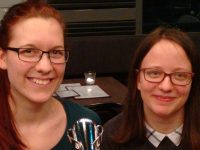 With great pleasure we announce that Anna Neuber & Kata Sebők are the champions of the Leiden Open Novice Final 2016. Competing as the team "The…read more →

Singapore Debate Open took place in the small capitalist police state from December 14th to 16th. The tournament was well organised and attracted a high…read more →