Possibly this article will alter history a little bit (sorry, that’s an Austrian habit). The first reason therefor is that due to writing this article several days after the tournament, the author’s memories are not so detailed anymore. Two things are totally clear, however: Budapest was loads of fun and it had something to do with debating. The second reason for creativity in this story is the fact that the reader might gain access to the tournament tab. In this case it is better to tell him some good excuses and possible ways of interpretation beforehand. So be aware that not everything stated in this article has to be taken literally*.

Aiming for the most important awards of debating tournament was the least we could do. Budapest is close, and a tournament there the best occasion to show our Hungarian neighbours that Austrian debaters have got what it takes. We knew that competition would be tough with good Serbian and Hungarian teams in the tab, but our amazing delegation accounted for almost one third of the tournament and was therefor very likely to succeed. Agnieszka Bibro, Aron Deutsch, Miriam Flaksman, Rosie Halmi, Christoph Jäger, Lio Kaufman, Karoline Lutz, Regina Puthenpurayil, Sabine Rainalter, Jakob Reiter and Stefan Zweiker with intimidating team names like Sisi Squad, Price Rudolf’s Revenge, Franz Ferdinand Force or Hungry Viennese Debaters made sure that DKWien would not only be going to see the shiny, George Soros funded, Central European University Budapest from inside, but would also produce an epic DKWien – WIN.

Rapidly the Viennese Debaters arrived in Budapest, and proofed their ambition. We were always the first that arrived at the venue for receiving motion and instructions (they have very comfortable couches by the way). On Sunday some of us even came two hours before the break was announced, which just underpins the effort we put into debating that weekend. Early morning sightseeing sessions were undertaken to clear the thoughts before the very important events at CEU. The only thing that was left out on DKWien’s site was sleep. However we believe sleep is vastly overrated and we compensated this factor by strengthening ourselves with some carbohydrates and awesome Hungarian Goulash. Thus the “Friendly Tournament” Budapest was very intense for all Viennese participants.

Lio Kaufman speaking in the final

The outcome of this story was  highly positive, but to evaluate it properly, we have to distinguish between two cases. Case A, the main aim is breaking into the final. If this was the case, the mission was completed highly successfully by Lio Kaufman and Fabian Farkas, who we just claim to have been a Viennese team. They broke second into the grand finale. In case B the most important trophy of any debating tournament is the “last man standing award”, even if it is just imaginary. This is the more likely case as usually all debaters at a tournament proof over-average debating skills, but only those who are still active while the others have already given up, show major durability and effort. Furthermore, while debates can only be measured by the subjective impression of judges, the “last man standing” is measured on the objective criterion of the time people went to sleep, which makes it fairer, too. It is, hence, definitely more relevant than other achievements in debating tournaments. In case B, we had 6 people that have deserved this win ex aequo, and also the following places would have been taken by DKWien. So, in any case this tournament was an epic success for DKWien. We loved it. 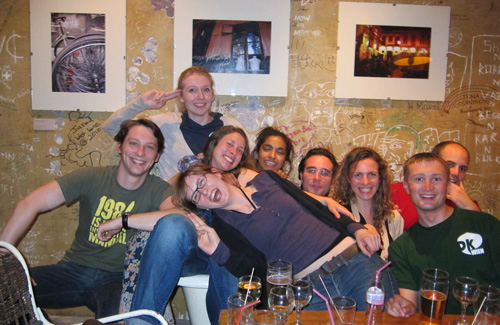 Yet, even though this would have been already a nice ending for this story there still has to be the standard overview for everybody who is already used to it: “Friendly tournament”, CEU, Budapest; July 1-3, 2011; 12 Teams; 5 Rounds, Final; 7 min Speeches, BPS; CA: Filip Muki Dobranić; Winner: “Whatever” (Eltringham Ramasenderen, John Cloud). Remarkable: no budged, no reg fee, but great organisers, obviously.

R1: THW would not eat meat

R4: THW would not allow China to bail-out Greece

Final: THW offer EU-membership status to Arab states, if they choose to adopt a democratic system

The gamut, as introduced with Split Union Open

For a relatively small tournament 5 rounds and 7 minute speeches were very ambitious. The international focus of CEU was the reason, why there were many international speakers involved. There was no reg-fee and crash provided for those who needed it. Since it would be unfair to compare a no-reg-fee tournament with the more expensive ones, the subsistence-factor is left out this time. The organisers have always shown us the right places to go to, so we were very satisfied with their performance.