Hot debates in a hot city – this was, in short, the Tilbury House Summer Open 2010. The Cologne debating society held its Open tournament shortly before Amsterdam Euros, thus giving us Viennese debaters a great practice opportunity! Leonhard Weese and Florian Prischl (team Wien Drahdiwaberl) and Agnieszka Bibro and Jakob Reiter (Wien Calafati) represented us as speakers in the same formation as for Euros. Sabine Rainalter of Debattierclub Innsbruck was our judge.The tournament started on Friday, July 9 with three preliminary rounds. Convenor Bianca Sterly and her team managed to attract a very international field of participants, with teams from practically every debating country in Europe. The tournament’s appeal to us was the practice we got for Euros, especially with the venerable  CA team of Isabelle Loewe, Will Jones and Derek Lande. We received useful feedback from them and most other judges. So when the tournament was behind schedule on Friday evening, we and the majority of participants voted to keep going even though it meant we would only get out of round three after 10pm. 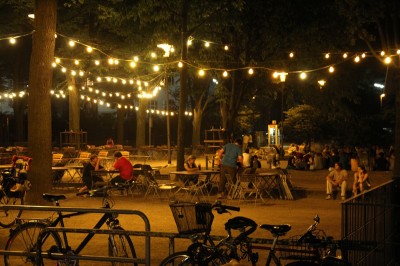 Cologne showed itself to be a fun city for going out, and we spent the rest of the evening in a park in the city, conveniently located between the University and our hostel. The temperatures that made the day almost unbearable provided for a nice night in the park, fueled by the infallible propellant Sabine has been bringing to most of her international tournaments as a greeting from Austria: Stroh 80. (See also our report from WUDC 2010.)

Saturday brought two more rounds, this time with closed adjudication. Unfortunately, the schedule provided for very limited time to obtain feedback afterward. Although we did not make the break, we enjoyed watching the semifinal debates. In a way we pitied those teams who made the brake, as they had to soldier on in the hellish temperatures the weather gods unleashed on Europe. 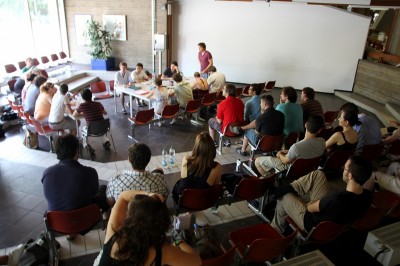 One of the two semifinals underway. Photo: Jakob Reiter

Some more delays on Saturday made the break between semis and the final a little shorter than expected, although we were glad that the grand final was held in a location that was noticeably cooler than the building we occupied on Friday and for most of Saturday. The debate was saw was of good quality and had deserved winners: Emily Pearce and Vignesh Ashok of Oxford A were able to claim the trophy that Bianca and the CAs handed over during the dinner/party in the evening. Vignesh also placed at the top of the tab. Congratulations! Contrary to many other debating tournaments, dinner on Saturday was plenty, and we even got free Kölsch on top of it. Later on, the German participants were distracted by the Germany-Uruguay game for third place in the Soccer World Cup, which eventually drew everyone in front of the screens, although it thankfully did not interrupt the lively chat that had developed among the diverse debating crowd. 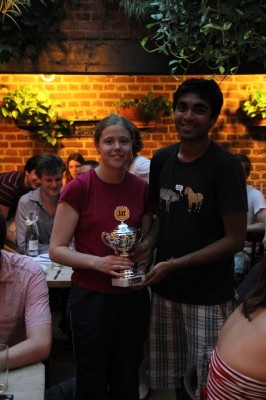 That diversity, together with the debating practice and the solid organization by Tilbury House, made this tournament a very enjoyable experience and the perfect stopover before Amsterdam. We met new people, found new friends and made new contacts to debaters near and far. Many thanks to all organizers and judges! We are already looking forward to the next Open in Cologne.

Unfortunately, the tab is not (yet) available online.

The motions of Tilbury House Summer Open 2010 were: