This House Will Learn!

The best occasion to do so: The Vienna Debating Workshop and Tournament on June 12 and 13 2010.

Speaker of the House, Ladies and Gentlemen!

We, the debaters, hold this truth to be self-evident, that debating is awesome. It would be foolish not to learn, and foolish not to listen to Lio, Manos and Milan. They will endow us debaters with certain unalienable methods of learning. These are learning by studying, listening, doing and interacting.

The Workshop: Learning by studying

About thirty people showed up as early as 9 o’clock in the morning to listen to the trainers talk about structure, analysis, argument and rebuttal, extensions an POIs. Divided into three different groups, each debater at the workshop got precisely the attention needed according to his or her skills. Manos Moschopoulos, Australian-Greek best speaker at Worlds 2010 (ESL) trained the Debattierklub’s two teams for the European Championship this July. He and Milan Vigjnevic, top of the EFL speaker tab at the same Worlds, came to Vienna from Belgrade, where they debate and organize tournaments for Open Communications. Lio Kaufman is a highly experienced debate trainer (his team won the Welsh maze in 2010) from Glamorgan University.

Held at the University of Vienna, the debaters had the opportunity to enjoy the prestigious arcade, being surrounded by the heads of the university’s smartest professors.
Scheduled until 5 in the afternoon, debaters from all groups voluntarily stayed as long as 7, getting the opportunity to debate the legalization of assisted suicide in Pro-Am teams.

The Show Debate: Learning by listening

Since we are so nice to our trainers we did not only exploit them for teaching us lessons, but also gave them the pleasure to debate amongst themselves. “Listen to the masters do it” was Saturday night’s motto. Lio, Christoph and Manos argued against Leo, Milan, and Fabian in the dungeon of a nearby pub over the motion “TH does not believe in nationalities”. The Opposition had a very difficult job: When we asked the pub’s guests, hardly anybody actually claimed to believe in nationalities. Nonetheless the debate was balanced and exciting, and the rest of the evening remained to be exciting for all of us.

The Tournament: Learning by doing

Again at 9 in the morning, the 24 debaters and three judges showed up at the front steps of a University the next day. Having memorized everything they heard and saw on Saturday in their head, every minute spent waiting for the motions felt like hours. The four motions were clear cut and well balanced. Five minute speeches did not only enable newcomers to compete, but also allowed more time spent on feedback, which was of course an important focus of this training tournament. The word that was to be heard most often in these feedback rounds was most definitely “structure”. We have tried to structure this article to show our trainers: Vienna is improving! Surprising everyone was Miriam Flaksman, who as a first-time debater almost made it to the final with her team mate Rosie. Extra credits also go out to first-time debater Olég Valgaev who made it to the final with Paul Lisowski as Team Aust. The other finalists were team Geissbock Teufel (Fabian Farkas and Christoph Jäger) as well as Debattierklub Wien’s two EUDC-bound teams, Agnieszka Bibro with Jakob Reiter as Blue Eyes and Florian Prischl with Leonhard Weese as Sputnik. 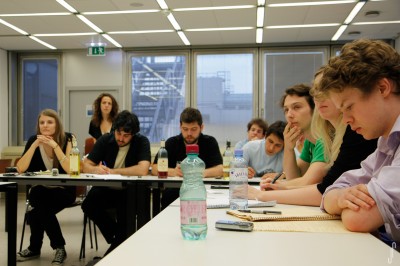 The government listens what others have to say – in debating. Photo: Stefan Zweiker

The Party: Learning by interacting

To be honest – It is not only the addiction to debating that makes the students attend the workshop. Debaters from Munich, Salzburg, Graz and Budapest made it to Vienna surely not only to debate. Despite not believing in them, 14 different nationalities were counted, demonstrating that Debattierklub Wien is a highly diverse place to debate and interact. What everyone also came for were the parties related to debating. This is one of the main reason that makes debating so dangerously addictive. Searching for profound principles why “this house believes in love at first night” touches the deepest questions of our society. Even more interesting is to approach these principles in reverse. In later hours on Saturday and Sunday there was empirical evidence that massive consumption leads to massive induction of arguments. To make it short: Whatever we deeply analysed, it doesn’t matter as long as our trainers were able to show their skill until the early morning. And finally: Knowing many things about debating and some stanzas of the Australian anthem, even the Opposition has to agree on the conclusion: The Vienna Debating Workshop was great!

Thank you so much, Lio, Manos and Milan for this awesome weekend of debating, workshop and party! We have learned a lot!

Many good friendships were made, many debates were fought and plenty of arguments were taken. We cannot wait to welcome you back at Debattierklub Wien!

Motions at the Vienna Debating Workshop:

The tab of the Vienna Debating Workshop 2010 Tournament is available for download.